An experienced leading hand was walking along the maintenance platform of a mobile crushing plant, which he had just started up in order to adjust the tracking on the feed conveyor.

The worker noticed a build-up of fines on an unguarded idler roller and tried to dislodge the fines by hitting the roller with a hammer. However, he misjudged his aim and his hand was drawn in between the roller and the conveyor belt. Fortunately, another operator quickly stopped the belt and rendered assistance.

The worker sustained a serious injury to his hand, which required surgery and skin grafts.

WorkSafe Tasmania’s investigation found the direct cause of the incident was that the worker attempted to knock the fines off the roller while it was rotating and misjudged his aim. When questioned why he did this instead of shutting down the plant and cleaning the roller, he said it was a ‘spur of the moment’ thing he did without thinking. He said he realised afterwards that he should have shut the plant down before attempting to clean the roller, and estimated that this would have caused a delay of 10–15 minutes. When asked whether this delay was a factor in his decision to hit the roller, he replied it wasn’t; his action was instinctive rather than planned.

WorkSafe Tasmania’s investigation also found that a contributing factor was that the idler roller was not fitted with a guard. If it had been, the worker wouldn’t have been able to hit it with a hammer and may have shut the plant down before trying to clean it.

The reason the roller wasn’t guarded was that when the plant was originally supplied, the roller was approximately 2.7m above the ground and out of the reach of operators who were standing on the ground. However, a maintenance platform had subsequently been fitted to the plant to reduce the risks of manual handling injuries and falls from height when carrying out maintenance work, and this platform brought the idler roller within reach of the worker when he was standing on the platform.

WorkSafe Tasmania also found there were discrepancies between the method of adjusting the belt tracking that was described in the operating manual and the methods used by workers. The locknuts and tail drum adjusters were located outside the tail drum guard, which meant the operator was protected from making contact with the tail drum while making any adjustments and would also be out of reach of the rollers. However, owing to the difficulty of accessing the adjusters from the ground, it had become accepted practice to access them via the maintenance platform, which, as stated above, put workers within reach of the roller as they walked towards the adjusters.

The photo below shows the plant with its feed hopper, feed conveyor, cone crusher, control panel and discharge conveyor. The incident occurred at the roller underneath the feed conveyor.

The photo below shows a view of the maintenance platform fitted to the side of the plant, the idler roller where the incident occurred and the tail drum and adjustment bolts. The roller was approximately 2.7m above the ground and the guard was installed after the incident. 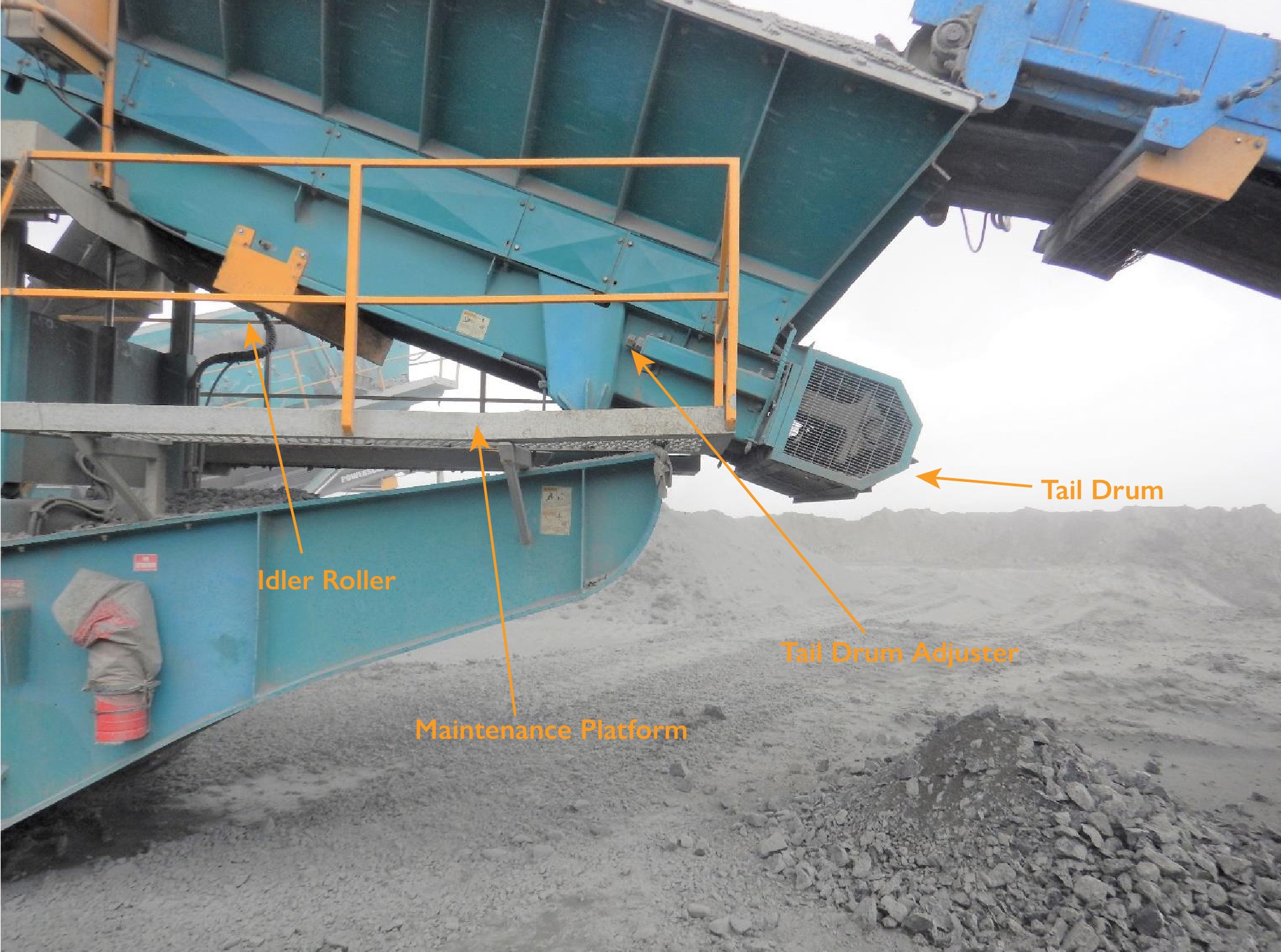 Managing the risks of plant in the workplace code of practice